Former Lebanese minister Wiam Wahhab said in a recent television interview that Iranian ships are loading their cargo and heading to Lebanon, despite ongoing US efforts – according to some observers – to financially choke the small Arab country.

Wahhab, a prominent Druze ally of Hezbollah, challenged the United States to militarily target these ships if it dared. The former minister was responding to concerns raised by the television host that the US may sanction the Lebanese government for accepting this urgent relief from Iran, or even forcefully stop these ships from reaching Lebanon.

The former minister explained that the Iranian goods will indeed reach Beirut, and they will be paid for in the Lebanese pound, thereby decreasing demand for the scarcely available US dollar and easing the crisis in the country.

Since October 2019 Lebanon has been in a financial crisis that has seen businesses close and prices and unemployment soar.

The Lebanese pound, which is officially pegged at 1,500 to the dollar, has lost over 80 percent of its value since October and is now trading at nearly 9,000 to the dollar on the black market after sharp falls in recent days.

(Important note: Please help us keep producing independent translations for you by contributing as little as $1/month here) 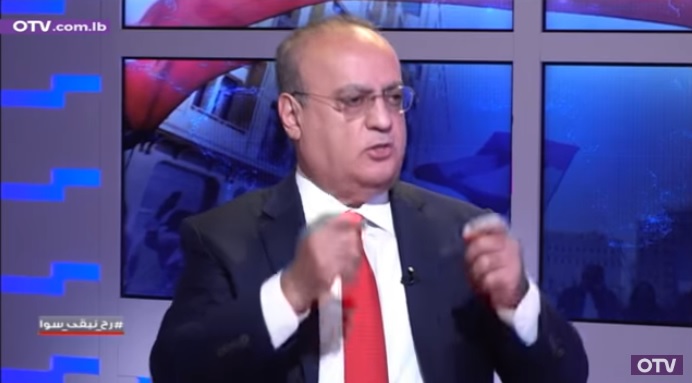 But you are talking as if this issue is only domestic in scope. We are forgetting that today there is a clear international talk that there will be no aid, no money, no oil and no gas (given to Lebanon) under Michel Aoun’s presidency, and under a government that Hezbollah is a part of.

According to some reports, there were plans to turn to Syria (for help), but there was a political veto that stopped it…there was an upcoming visit (to Syria) that was canceled because of a political veto. How is this related to the government and the (promised) reforms?

Wahhab: We are now going to get foodstuffs. Let them try to stop us.

Host: Where are you getting them from?

Host: Available for the whole Lebanese market or only for Hezbollah’s allies?

Host: Won’t we receive sanctions because of that?

Host: At what port?

Wahhab: I am not going to tell them. The ships will arrive…

Host: Of course they won’t dock in the port of Tripoli.

Wahhab: Why not? Do you think Tripoli will be excluded from the distribution (of foodstuffs)?

Host: Logically, there is no way the ships will dock in the port of Tripoli.

Let the Americans send us ships (with aid). We have no problem with that. Anyone in the world can send us ships. We will not let them starve our people! We will not starve! Stop trying to intimidate us and stop trying to use intimidation to get what you could not get through war and politics! The foodstuffs will arrive and traders will pay (for them) in Beirut. (For future purposes too,) once they pay, their goods will be shipped (to Lebanon). The foodstuffs will arrive to (Lebanon) and will be available for the Lebanese consumer. Enough with this game!

Host: And all of this (help) is in return for what…this Iranian support?

Wahhab: (Iran) wants nothing in return.

Host: Isn’t it because Lebanon has become the place with the biggest influence (for Iran)?

Wahhab: Didn’t the (Iranian) ambassador Ghadanfar Rokon Abadi, may he rest in peace, go to the Lebanese officials and offer them 24/7 electricity supply without asking for anything in return? They (Lebanese officials) did not accept his offer. Get me electricity from the Americans! I would take that offer. I don’t mind.

The Americans are providing us this support for the army…you know that this support is not provided directly as funds, it comes in the form of training programs, preparing officers, travel expenses, military uniforms etc. However today, I will not let people starve because this or that side will get ‘upset’.

Wahhab: Don’t concern yourself with this question…

Host: No we want to see whether it came in the form of an official request from the Lebanese government…

Wahhab: There is no need for me to tell you…

Host: I am just asking you, am I not allowed to ask you?

Host: Is this a serious decision that has been taken today, or is it merely a card that is being waved in the face of America?

Host: Okay, the ships are on their way and they will arrive, but are you able to go on with the confrontation? This is a decision to take the path of confrontation with America…

Wahhab: Why is this a path of confrontation?! We wish to eat! Confrontation of what?

Host: Iran has sanctions on it.

Wahhab: What sanctions? Sanctions on food and drink, or sanctions on weapons? Are we not allowed to eat?!

Host: So do you think the United States of America will turn a blind eye to (Iranian) ships carrying foodstuffs to Lebanon?

Host: No, but it can pressure us more economically, it can choke us further…

Host: Perhaps it may put sanctions on the Lebanese government…we would be even worse off than Veneuzela.

Wahhab: Well how is our situation better than…

Okay I see your point, Venezuela is much better off than us right now…so you think that’s it, we have already reached the lowest point of the (economic) collapse (in the country)? Can we not go any lower?

Who said we have collapsed…so if the Americans are not happy with us, then that means we are heading for a collapse? There are other options, but the (Lebanese) state is not taking them.